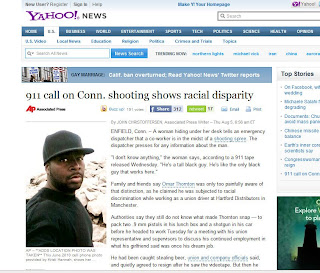 My head is going to explode over this headline: "911 call on Conn. shooting shows racial disparity". I don't know who wrote the headline (Yahoo! or the AP), but it is completely misleading and racially charged.

The first two paragraphs are the only one that deals with the 911 call:

A woman hiding under her desk tells an emergency dispatcher that a co-worker is in the midst of a shooting spree. The dispatcher presses for any information about the man.

"I don't know anything," the woman says, according to a 911 tape released Wednesday. "He's a tall black guy. He's like the only black guy that works here."

How in the WORLD is describing the crazy mad shooter "racially disparity"? That has to be the dumbest, most inflammatory way to describe the caller's actions I can think of. Really, really bad form, AP and/or Yahoo! Super lame.

(The story then goes on to describe the difficulties the man had being the only black man in his office. I have no information about whether or not he was discriminated against in his job. That, however, is not relevant to the headline. The woman under the desk was describing the physical attributes of the attacker for the dispatcher, presumably so the police could identify him.)